What Are Some Solutions to the Problems Regarding GMOs Presented by the Public Such as Labeling & Packaging on Foods, Contamination, Allergies, and Disease From Consuming GMOs?

allergens and disease: I am not sure exactly what you are asking in the latter part of this question as there have been no cases of allergies or disease documented with consuming GMOs. In fact, there is work going on using genetic engineering (GE) to remove allergens from foods like peanuts (http://www.foodnavigator-usa.com/R-D/Allergen-free-GM-plants-may-boost-food-safety-experts) and removing toxins from foods like cassava (http://researchnews.osu.edu/archive/cassava.htm). If you think about it, with genetic engineering you are only changing one (or at most few genes) and you know exactly what proteins they code for so you can test for allergenicity or toxicity of that protein. When you make conventional crosses with a wild type to bring in something like pest resistance you are bringing in thousands of genes that you have no idea what proteins they all code for. Conventional crosses have resulted in high levels of allergens or toxins in the past like the lenape potato (http://www.tested.com/science/weird/454414-dangerous-genetically-modified-potato/). Another technique that is used to produce new varieties is chemical or radiation induced mutation. This technique is not considered a “GMO” and the resultant food can be sold as conventional or organic food. Using this techique you have no idea what mutations you have induced or what allergens or toxins might be produced without extensive testing. Unlike “GMOs” there is no testing required and no public demand for labeling.

As far as disease from consuming “GMOs”, I would refer you to the scientific consensus that GE food is no more dangerous than foods produced via traditional methods. This is a statement on page 18 from the European Commission’s report A decade of EU-funded GMO research, “the main conclusion to be drawn from the efforts of more than 130 research projects, covering a period of more than 25 years of research, and involving more than 500 independent research groups, is that biotechnology, and in particular GMOs, are not per se more risky than e.g. conventional plant breeding technologies.” (A Decade of EU-Funded GMO Research (2001-2010)). The National Academy of Sciences released a similar statement, “genetic engineering is one of the newer technologies available to produce desired traits in plants and animals used for food, but it poses no health risks that cannot also arise from conventional breeding and other methods used to create new foods.” (http://nas-sites.org/teachers/files/2012/05/ge_foods_final.pdf)

contamination: There are ways to reduce the likelihood of contamination, but certainly the possibility exists. Europe adopted a 0.9% level as a limit for acceptable contamination.

labeling & packaging on foods: This is certainly a contentious topic for many in the public. First the public’s view on labeling is very dependent on how the question is asked. If you look at the chart below you see that the majority of the public would be in favor of mandatory labeling foods produced with genetic engineering; however, it is interesting to note that almost the same amount of people are in favor of “mandatory labeling of foods contain DNA (which of course is everything). 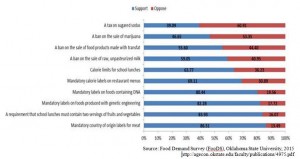 If you ask the public an open ended question like “what other information that is not currently on the food package, if any, would you like to see there”, very few people seem to be concerned about “GMOs”. 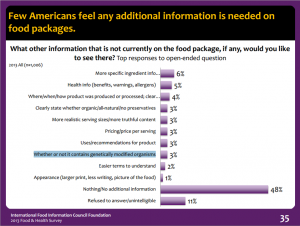 Although there is not a consensus about how much labeling would cost, there are costs to consider other than merely slapping a label on a package. Food segregation from farm to grocery could be a significant cost as well as any regulatory and testing system that would be needed for the label to be meaningful. There would have to be a system to document the crop from field to processor as it is impossible to determine whether sugar came from non-gmo sugarcane or GMO sugar beets once it has been processed because there is no protein or DNA. You would have similar problems with a host of other non-protein containing products such as high fructose corn syrup or corn, soybean or cottonseed oil. Similarly, if labeling of animal products were mandated there would have to be a system to verify that animals did not consume GMOs.

The current initiatives by states to mandate labeling are confusing as states have different criteria. For example, Vermont excludes cheese and other animal products like meat, milk and ice cream. Over 90% of the cheese in the US is made using genetically modified microbes to produce chymosin (rennin) to replace the old practice obtaining chymosin from calf stomachs. Most animals are fed genetically modified corn or soybeans.

Many opponents of labeling argue that such labeling is process based rather than product based. There are some precedents that have ruled that mandatory process based labeling is not legal, so it will be interesting so see what happens if this issue goes to court.

There is also the possibility that if labeling becomes mandatory, stores will discontinue any product containing genetically engineered products. This is basically what happened in Europe. Stores that carried GMOs in Europe were often picketed or harassed by anti-GMO activists. Some of the leaders of the labeling movement have made statements that suggest their real goal is the elimination of GMOs as you can see from the quotes below: 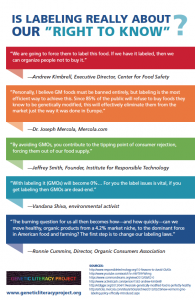