A: Good question. Here is a rather short answer to this question from NAS: FAQs on GE Crops | Genetically Engineered Crops at the National Academy of Sciences

Genetically engineered and genetically modified are often used interchangeably when referring to varieties of crops developed by means other than traditional breeding. Genetic modification refers to a range of methods (such as selection, hybridization, and induced mutation) used to alter the genetic composition of domesticated plants and animals to achieve a desired result. Genetic engineering is one type of genetic modification that involves the intentional introduction of a targeted change in a plant, animal, or microbial gene sequence to achieve a specific result.

Most scientists would say that almost all the food we eat has been “genetically modified” by man and that genetic modification includes not only conventional breeding, but simple selections man has made over millennia. Carrots were not orange until the 1700’s and tomatoes used to be the size of marbles. Corn used to have very small ears and kernels with hard seed coats and low digestibility. See picture below from NSF. 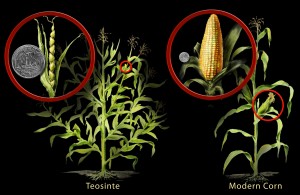 Genetically modified food would include almost all the food we eat. Several different ways plant genomes are altered “conventionally” and via genetic engineering are described here. Genetically engineering is the direct manipulation of an organism’s genome using biotechnology. Although many people think this means moving genes from one species to another, that is not always the case. There are several biotechnological methods of manipulating genes. Sometime this is done by actually moving genes within a species or from a closely related species. This resulting organism is referred to as cisgenic. Gene editing is another method of manipulating DNA. There are several techniques available for gene editing including zinc-finger nucleases (ZFNs), transcription activator-like effector nucleases (TALENs), and the clustered regularly interspersed short palindromic repeats (CRISPR)/Cas systems. Gene editing may involve deletion, insertion, silencing or repression. The resulting organism from gene editing is called subgenic.

A discussion on the difficulty in defining exactly what a “GMO” is can be found on the Genetic Literacy Project website.